Inspiration often comes in twos for me. While reviewing a recent blog article, What’s New in JUnit 5.4, a colleague suggested I go into more depth on the usage of extensions in JUnit 5. Then in my twitter timeline I saw this from one of the core committers of the JUnit 5 framework: 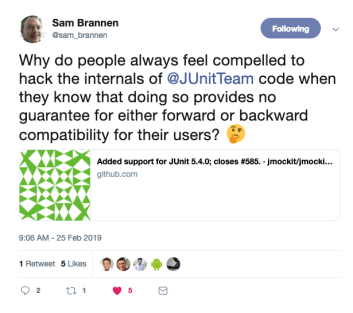 Later on in the thread, what was trying to be done with the “hack” could had been accomplished by creating a custom extension that’s available to the public.

The above tells me two things; there is a need for a deep dive on the JUnit 5 extension model and a need to explain the extendability aspect of the JUnit 5 framework. When I talk extendability, I’m specifically referring to the quality of being able to build on top of the existing framework that the JUnit team has provided in JUnit 5. Whereas hacks have often been the modus operandi for getting around the limits of frameworks (rather those limits were intentional or not!), the JUnit team went to great strides to make JUnit 5 extendable, and we’ll see in this series how to take advantage of that quality.

JUnit 5’s extension model and extensibility are by no means trivial subjects, so to make it more digestible, this will be a three part blog series. The subject of each blog article will look like this:

In this article, we will take a high level overview of the extensions model from the perspective of a user of extensions; well learn why the extension model was introduced, how this improves upon what was in JUnit 4, the different ways to register an extension, and how to define the order of extension execution.

JUnit 5 was a fundamental re-write and re-design of the JUnit framework. Some areas largely remained the same, though with a few enhancements, like assertions. Other areas were completely overhauled, which includes runner (@RunWith), MethodRule (@Rule), and TestRule (@ClassRule), being rolled into the new extension model.

The benefits of this overhaul can be experienced in a number of ways. A pretty obvious one is you can now declare multiple extensions at the class level whereas before you could only declare a single @RunWith:

A bit more subtle, parameterized tests and normal tests can now co-exist in the same class:

If you haven’t run into the constraints imposed by the previous Runner and Rule architecture, I can assure you it’s quite the painful experience when you do! So being able to register multiple extensions in the same test class or locate a parameterized test and normal test in the same test class are reasons to celebrate. But this is only just scratching the surface of the extension model, so let’s start going deeper.

Extensions can be registered declaratively with an annotation at the class, method, or test interface level, and even with a composed annotation (which will be covered in-depth in the article on extendability). The code samples above are examples of registering extensions declaratively.

Declarative registering of extensions is probably the easiest way of registering an extension, which can be made even easier with a composed annotation. For example it is easier to remember how to write @ParameterizedTest when you want to declare a parameterized test than @ExtendWith(ParameterizedTestExtension.class).

As you are using an annotation to register an extension all the constraints with using annotations are there, such as only being able to pass static values to the extension. Also a test class cannot easily reference extensions that have been registered declaratively.

Test classes have a much greater degree of freedom when interacting with a programmatically registered extension as they are just another field within the test class. This can be great for retrieving values out of an extension to verify expected behavior, passing values into the extension to manipulate its state at runtime, as well as other uses.

The final way to register an extension is with the Java Service Loader. The Java Service Loader can best be described as arcane, at least I generally get blank stares or looks of confusion when I bring it up. Though like many arcane things, it can be very powerful for both good and ill!

The Java Service Loader can be used to automatically register extensions within a test suite. This can be helpful as it allows certain behaviors to happen automatically when executing tests. The flip side to this, depending on the type of work that is occurring within the extension, this could have a non-trivial impact on your test suite runtime, it could also interfere in a non-obvious way with how a test behaves (the person executing the test might not realize the extension is being executed because it wasn’t registered locally). So to quote Uncle Ben:

Registering an automatic extension is a more involved process than the other two ways, let’s quickly walk through the steps:

You can see a full example of the above here. Note META-INF is located under /src/test/resources.

As of JUnit 5.4 there are two ways to order how extensions are instantiated during the test cycle. Ordering extension execution could be useful in the realm of higher level tests; that is test above the unit test level. Integration tests, functional tests, feature tests, and other such similar tests might require complex setup and tear down steps.

Even for test code, it is still important to follow principles like single responsibility. If for example you have a feature test that verifies the behavior for when your application interacts with a database and cache, it would be better to locate the logic for setting up and tearing down the database in one extension and similar behavior for the cache in a separate extension, instead of putting all that behavior in a single extension. This allows for great reusability of each extension as well as making them easier to comprehend.

When registering an extension declaratively, the order of declaration within the test class is the order in which the extensions are registered and executed. Take the below example:

I haven’t personally used this feature a whole lot. I have a lot of confidence that, from a framework perspective, this feature behaves as designed. What I worry about however is the extent this feature would be understood by most developers and test engineers. In my experience, the order in which annotations are declared in a class or on a method is not something that developers and test engineers often think about or interact with. If this concern is ever surfaced, it’s often for stylistic reasons, for example; the shortest annotation should be declared first.

The good news is, is through the enhancements to extendibility that I mentioned in the introduction to this article, a custom annotation could be created and shared that includes the declaration of multiple extensions in their proper order. We will take a deeper look at custom annotations, and other examples of extensibility later in this series.

To define the execution order of a programmatically registered extension the annotation @Order(n) needs to be added to the declaration of the extension field. You do not need to add an annotation at class level like you would for ordering test methods to enable this behavior. However like when ordering test method execution, you do not need to order every extension. Extensions that do not have a defined execution order are executed after all extensions that do, following the “consistent, but intentionally non-obvious” process mentioned above. So in the below example:

The new extensions model added a lot of much needed (and appreciated!) flexibility when it replaced the runner and rules architecture from JUnit 4. In the next article in the series we will take an in-depth look at the lifecycle of an extension and build our own custom extension!

The code used in this article, and series, can be found here.

2 thoughts on “An Extended Discussion on Customization in JUnit 5”